Monday was the first day of summer, according to the calendar.  But it's been summer for a couple of months now in these parts. I always start summer with great plans of the things that will get done - and some of them DO get done.  But then the heat limits your activities, and afternoons seem like perfect time for naps, and kids sleep until whenever.  You start off thinking that there will be infinite time - no commitments - and then the time fills up and you are as busy as you were during school - albeit with different, and  usually more pleasant activities.

It seems like things aren't as interesting during the summer.  Days pass, and nothing says,"blog about me".  And so I don't, because I can always do it later.

Monday, I got up and went to Mass.  That is always the best part of a day.  I had gotten Immaculee's book, Our Lady of Kibeho for my pastor at the retreat on Sunday.  I waited until the last day, and something pointed me to that book.  The idea that the story of Our Lady's apparitions in Kibeho might be the story that Immaculee was left to tell.  That and one of the ladies working at the bookstore mentioning that while priests here might be different, where she is from, 10 out of 10 have never heard of Our Lady of Kibeho.  So I bought the book, and had it signed. 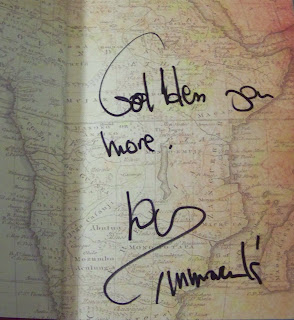 It says, "God bless you more.  Love, Immaculee"  My sister-in-law also bought her priest a [different] book, but she just signed it, "God bless you".  SIL made sure to tell her priest that Fr. R (my pastor) was more blessed than he was.   Anyway, I digress.  I gave him the book after Mass on Monday.  I think I caught him off guard.  He thanked me, but didn't say much and I didn't hang around.  Either he'll read it or he won't - depending on where the Holy Spirit leads.  I have to think though, that he'll at least open it up out of curiosity or to look at the pictures.  And maybe read.
Met a friend to work out.  I think I overdid the back-ab machine trying to get the little @#$% light to stay green.  My back hurt all day - not a pulled kind of hurt, but a stiffness.
Last week, when I went to confession, we talked about quiet places and how to find them.  His suggestion was to visit a somewhat-nearby monastery, and he mentioned that he said Mass there on Tuesdays.  There is no Mass at our parish on Tuesdays.  Usually I go to St. P's or Our Lady of the Library on those days.  So I debated.  I don't want to look like a priest groupie/stalker following him to the Monastery, but it was a viable option.  I also enjoy OLOL, but sometimes it is just too busy  joy-filled and the library is crowded cozy.  In the end, I went to the monastery.  And when Mass was over, I stayed and prayed the Rosary. 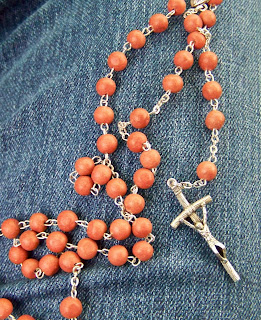 The Rosary is something that I've never developed a great affection for.  My mind seems to wander a million different directions, and its most common use in my life has been as an almost sure-cure for insomnia.  It's been so long since I've prayed it with any kind of regularity, that I had to print off a cheat sheet for the mysteries.  But I stayed, and recalling Immaculee's meditations on the sorrowful mysteries, I actually meditated on them.  It might be the first time ever!

Wednesday found dear hubby and I taking a car to the shop in the early morning and meeting with an accountant to see about our taxes mid-morning.  Mass was at 12:15.  Sitting there before Mass, I had an idea.  Backing up:  Prayer is something that I struggle with at times.  Mass is non-negotiable.  If I can get there, I'm there, and my day is better for it.  But personal prayer is more hit or miss...for the last couple of years, I've tried to pray the Liturgy of the Hours in the morning and evening.  It has been both a blessing and a burden.  I have found some great treasures in the psalms.  It is at times a way for God to speak to me.  And probably most days, I pray both morning and evening.  Each takes about 15 minutes and sometimes there is a temptation to just blow through it with half a mind or put if off or skip it altogether.  Then this weekend, there was the exhortation to pray the rosary.  Pray.  Pray. Pray.

I struggle with this because there are only so many hours in a day.  Don't I do enough attending Mass?  How can I add in something else?  And then sitting there... I thought.... I could pray the Rosary and one of the Hours.  It was such an obvious and simple solution.  Who knew?  Let's see if it will work.  It still involves taking time from "my" stuff to focus on something else.

Late afternoon, dropped the kids and a friend off to see Toy Story 3, and did some shopping with friend's mom.  It was quite enjoyable.

Skipped working out.  Fell asleep working on this post and neglected that nighttime prayer.  :-(  I'm a work in progress. 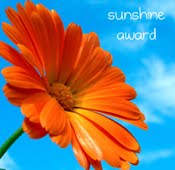